Algeria is the largest country on the African continent. It has a diverse landscape that attracts many tourists and visitors for sightseeing. Let me take you around the ten (10) most beautiful places you can visit in Algeria.

Algiers is the capital city of Algeria and its population span around 3,500,000 million. Ottomans found and beautified it with spectacular history and architecture. It has an ancient casbah which is a winding urban maze and streets that are flowing like streams. Algiers also has Dar Hassan Pacha which had the city’s most deserted mansion. A visit to the city opens you up to the past, present and future of Algeria. It is a worthwhile place to visit.

This is sometimes referred to as Tam and is in the southern part of Algeria. Infrastructure like banks, shops, restaurants, amenities found in cosmopolitan town is in Tam. If you want to explore the Ahaggar National Park and still have your comfort, then Tam is the place. This town remains unsafe to visit unless on a guided tour. You can put Tam down as one of the places to visit in future. 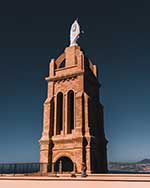 This is the second city in Algeria, filled with lively ports that attract tourists. It has many historic buildings which are the beautiful mosques, casbah, and Le Theatre.
It is a great place for scuba diving, Algerian cuisine, and lively Rai music that originated from there.
Though this is a pretty beautiful place to visit, one needs to be careful because the political unrest they had in the 1990s is still on.

It was once the capital of Numidia. It is a natural marvel that has changed over the years into an attractive spot for tourists. The majority of the buildings there is accessed by crossing the bridge across a large canyon. It makes the city have a feeling of fantasy which had been in place since the time of Romans. The city is beautiful and will take a few days to explore.

This is at the edge of the Sahara Desert. It is a town that has its right, dress, social tradition and religion. They are independent, self-sustained and self-managed. There is a need for a guided tour for you to be able to explore the beautiful town of Ghardaia. They have diverse food and accommodation that vary both in price and quality like in most Algerian cities.
When you visit this town and have a taste of their varieties, you have this feeling you have visited more than one country.

Romans discovered the Setif. It is in the little Kabylie region of Algeria. From sea level, it is 1,100 meters. It is worthwhile to take time studying the Roman ruins in Setif. Apart from the Romans, another country that has left its landmark in Setif is French. The centre of attraction in this city includes the main square that has Roman sculptures. You will have an incredible stay and a wonderful experience visiting this great town.

El Oued is nicknamed ‘City of thousand domes’. This is because it has many domed roofs on buildings. During summer, there is intense heat from the sun, so the domes are used for roofs to protect people from the intense heat. One major reason visitors troop into El Oued is for shopping. It is the best place for shoppers in the entire country. The things that you can buy here include the carpets and affanes. Affanes are the traditionally made Algerian slippers and they are beautiful. It gets busy mainly on Fridays.

It looks like a Mediterranean town with white buildings and blue roofs. But it is the main town in the Tassili region of Algeria. It feels tropical because it is set in a palm tree oasis. Djanet is charming but has a little centre with only a post office, restaurants, shops and banks. Weekends in Djanet are always blissful because French tourists usually come to experience the peacefulness and striking surroundings. Visit Djanet on the weekend so you can have a full taste of the town.

Batna is close to Constantine but it feels much different. Salt flats demarcated it from Constantine. It is the capital of the Aurus Massif, which was made up of a continuation of the Atlas Mountains. Batna’s history was signed into decree in 1948 by Napoleon III. Because it is located in a valley, Batna is very hot during summers and very cold during winters. The city has a great population of 30,000 students and is a very good place to go on tour or casual visit.

This city derived its name from its famous salty water. The salty water is the only source of drinking water in the city, so if you do not fancy salty water, you will need to come prepared with your water. Their buildings were built in Sudanese style and the mosque is gradually being overtaken by a moving sand dune. The sand dune moves at the rate of 1 metre every five years and as soon as it covers one building, it discloses another building that it has covered for some time.