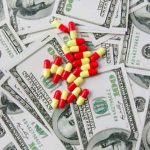 The illicit transport of hard drugs has been a major source of concern to many countries of the world. Not only does drug trafficking affect the national development of a country, it also poses a threat to the security of its citizens. In an attempt to reduce or totally eliminate this menace known as drug […]