The Nigerian Air Force is the air arm of the Armed Forces of the Federal Republic of Nigeria. It is one of the largest air forces in Africa with an estimated 16,000 personnel according to the CIA world factbook. 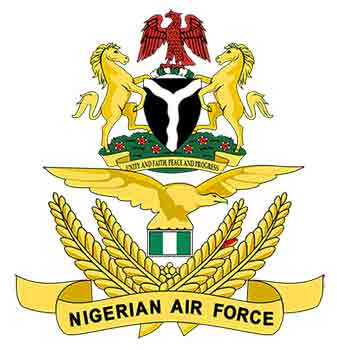 The need for an air force to support the operations of the Nigerian armed services was highly necessitated during Nigeria’s participation in peacekeeping missions in Congo and Tanzania. During this foreign missions, Nigerian military solicited the help of foreign air forces to airlift Nigerian army troops to the theatre of operations.

The government in power recognized the urgent need for an air force actively supported by professional personnel and modern facilities. The federal government then agreed in principle that an air force should be established. The Nigerian parliament then approved the decision, leading to the establishment of the Nigerian Air Force and recruitment of cadets in June 1962.

The Nigerian Air Force has since developed greater fighting capabilities to curb terrorism in Nigeria.

Unlike most third world countries, Nigeria currently fields some high tech air platforms it utilizes for surgical strikes, intelligence gathering and general surveillance. Currently, the Nigerian air force has flown more sorties than any other nation in sub-Saharan Africa.

Apart from the basic monthly salary, Nigerian Air Force officers are also eligible for operational allowances and other seasonal bonuses as prescribed by the Nigerian Military leadership.

Since its formation in the 1960s, the Nigerian air force has made a series of notable contributions to the Nigerian Armed Forces.