What do we really know about Nigeria’s self-acclaimed billionaire “Hushpuppi” who is seen to flaunt his flamboyant lifestyle on Instagram and other of his social media accounts? Though his source of wealth is still unknown to the public but many have assumed that he is into real estate and have numerous investments in which we really don’t know the authenticity of. I know a lot of people are really curious about Hushpuppi and who the man behind the flashy lifestyle really is. 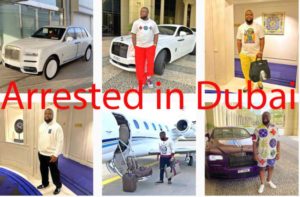 Recently, Hushpuppi has been in the news for his arrest which has generated a lot of controversies. Labelled as Nigeria’s most wanted hacker by the EFFC, he has been declared wanted in relation to numerous money laundering crimes as well as internet fraud.

The Instagram celebrity is currently in police custody in the United Arab Emirate which would be discussed more in this article as well as his biography, and net worth.

Hushpuppi whose real name is Raymond Igbalodely is a Nigerian entrepreneur as well as a social media influencer. He is known for his extravagant display of wealth on his social media. He claims to be a real estate developer and has a mass following of over 2 million people on Instagram.

Hushpuppi was born on the 14th of June in Lagos, Nigeria. The year of his birth is yet to be known but there have been various speculations on his age which has not yet been confirmed. Hushpuppi came into spotlight as a result of his flamboyant lifestyle which he stylishly flaunts on his Instagram and Snapchat account.

He is said to be from a humble background as he was not born with a silver spoon. His mother is reported to be a baker while is father is a taxi driver. When talking about Nigerian richest celebrity, his name is always mentioned but the source of his wealth is what many Nigerians have no clue about.

He is reported to worth $20 million due to the extravagance of his lifestyle. He is also said to own fleet of cars, posh houses and designer clothes and accessories. His favourite brand is Gucci and that is clearly seen from his numerous pics he shares on Instagram. You will also love to know that Hushpuppi is said to be based in Dubai.

Hushpuppi has been related to other big boys like Cubana chief priest, Mompha, Classicbaggie, Efe Martins and Mr. Woodberry. These people aforementioned have been allegedly reported to be involved in internet fraud as well as money laundering.

On June 10, Hushpuppi was reported to be arrested by the International Police (Interpol) and the Federal Bureau of Investigation (FBI) in Dubai alongside his friend Mr. Woodberry on the count charge of internet fraud.

He was reported to have been involved in money laundering of over $100 million meant for Americans who are unemployed amidst the Covid-19 pandemic and ventilator scam of $35 million which is being thoroughly investigated by the FBI.

The EFFC has recently declared Hushpuppi wanted as he has been labelled Nigeria’s most wanted hacker by the antigraft agency. He is alleged to be involved in numerous money laundering crimes which are being investigated by numerous authorities across the globe.