Abia state is a south-eastern state in Nigeria. It shares borders with Imo state to the west and Cross Rivers State and Akwa Ibom State to the east and southeast respectively. To the south of the state is Rivers State, and to the North and northeast are 3 states—Anambra, Enugu, and Ebonyi. 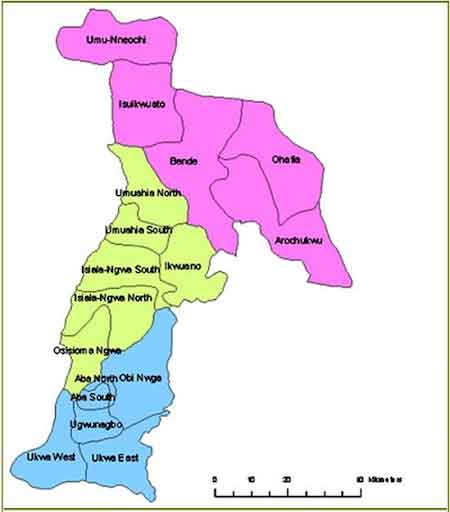 Inhabitants of the state are called Abians. The state is made up of 17 Local Government Areas (LGAs) and is predominantly dominated by Igbos.

Crude oil and gas contributes heavily to the state’s GDP. Other contributors are the agriculture and manufacturing sectors (textile, pharmaceuticals, soap, plastics, cement, footwear, and cosmetics). It is speculated that the state is blessed with over 35 solid mineral deposits.

Some of the major mineral resources are:

Abia state is one of the oil-producing states in Nigeria. There are over 100 oil wells and 3 installed flow stations in the state. Crude oil and gas contributes over 35% to the state’s GDP.

Ukwa West LGA is the highest oil-producing area in Abia state. Some of its oil-rich communities are Owaza, Uzuaku, Umuokwor, Umuorie, amongst others.

Some communities in Ukwa East, and Ugwunagbo LGAs also have oil deposits.

Limestone deposits in Abia state can be found at Ewe (Arochukwu LGA) and the southwestern part of Isuikwuato LGA.