Nigeria is a country blessed with diverse people with various uniqueness – with beautiful cities and abundant natural and human resources. Here’s a review of the 36 states in Nigeria, their capitals and what makes them reputable. 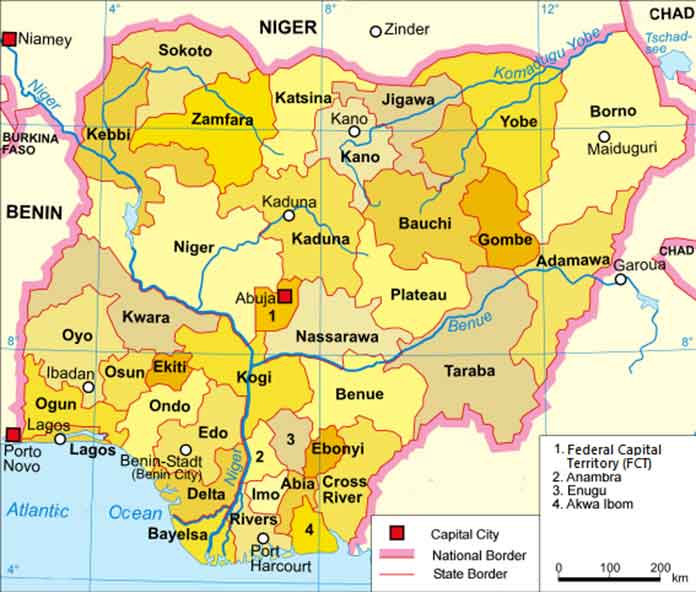 With its state capital at Umuahia, Abi State is among the states in Nigeria that is popularly known for rich Agricultural produce. This is as a result of their rich soil which stretches from the northern to the southern parts of the state.

Adamawa State has its capital at Yola, and is noted for its rich cultural heritage which reflects in its history, i.e. dances, dress patterns, craftsmanship, and music. It is believed that the State was named after a warrior, Modibbo Adama Bin Ardo Hassan, who conquered the region at the beginning of the 19th century. The major occupation of the people is farming, they are popularly known for the production of cash crops which are mainly cotton and groundnuts while food crops include maize, yam, cassava, guinea corn, millet and rice.

Akwa Ibom State has its capital at Uyo, and is located in the southern region of Nigeria called the Niger Delta, and is currently the highest oil- and gas-producing state in the country. They are popularly known for their rich cultural heritage, which is demonstrated by their dance and food.

Anambra State – Light of the Nation

The people of Anambra State are very industrious and business oriented. The Onitsha market situated at almost the river bank of the state is reputed to be the biggest in West Africa. Aside from the people resources in the State, Anambra is also rich in natural gas, bauxite , crude oil, ceramics etc. and most of its natural resources are still yet untapped. Its capital is at Awka.

As the slogan implies, pearl of tourism, the state is popularly known for tourist attraction. It is a tourism hub for its warm spring and game reserve. It is well loaded with lots of tourist centre, especially the Yankari games reserve, coupled with many fun fare centres.

Bayelsa State – The Glory of all Land

Bayelsa another southern state in the core Niger Delta region of Nigeria, Its capital is Yenagoa. They are mainly Ijaws. Bayelsa State has one of the largest crude oil and natural gas deposits in Nigeria. As a result, petroleum production is extensive in the state. Bayelsa is popularly characterized by its riverine and estuarine setting.

Benue state is said to be the nation’s “food basket” because of its rich and diverse agricultural produce.

The people of Bornu are popularly known for their rich agricultural produce.

These people are widely known for their festivity and rich cultural heritage. The Calabar festival is one of the most-sought annual events in Nigeria.

Delta State – The Heartbeat of the Nation

Ebonyi State – The Salt of the Nation

Agriculture is the major occupation of the people of the state. They became so popular with the production of the “Abakaliki Rice”

Edo State – The Fountain of Knowledge

Edo State is endowed with abundant natural resources. Although their major occupation is agriculture.

The state is largely agrarian. Agriculture is the mainstay of the state economy.

Enugu is popularly known for the Coal mining prowess.  The Oji River Power Station is one popularly landmark in Enugu which used to supply electricity to almost all the eastern state.

The people of Gombe State are mainly farmers and they produce both food and cash crops. The state is also blessed with natural resources like Uranium, Gypsum, and Limestone.

The Imo people are known for their rich traditional and cultural festival. Another thing that contributed to the popularity of Imo people is the acclaimed high pride price been demanded by their kinsmen.

Largely characterized by informal sector activities with agriculture as the major economic activity.

Kadunna State provides the meeting point of the earliest histories of Nigeria. It is the home of Nok which gave its name to the oldest culture of Nigeria – the Nok culture.

Kano has numerous tourism and cultural centres which include the colourful annual Durbar, leather works and craft. There are museums and monuments which are repertoires of our rich cultural heritage. It is the centre of commerce in the Northern region of the country

It is a tourist attraction because of the wall that surrounds it with its seven different gates.

Kebbi state has an agriculturally viable environment since it is endowed with high soil fertility, vast farmlands and economically viable rivers sheltered by fine tropical climate.

The state is popularly for the harbouring point Niger-Benue confluence, it is richly endowed in tourist attractions and has no less than twenty-three tourist centres. It is also notable for being the biggest European cemetery in Nigeria containing the remains of the European soldiers of the West African Frontier Force.

Kwara State – the State of Harmony

They have rich cultural heritage and are popularly known as a result of their  Awon festival which is held annually at Shao, in remembrance of Awo goddess. During the festival all the marriageable girls are given out in marriage in one day.

Lagos State – the Centre of Excellence

Lagos is notable for being the nation’s economic and commercial capital. It is the busiest state as claimed by some people.

Nassarawa is richly endowed with scenic beauty and conspicuous features. With rocks and hills.

This state is popularly for having the largest land mass in the country and are richly endowed for their rich agricultural produce.

Ogun state is popularly known for having the Ijebu Garri, having the highest number of registered universities in Nigeria and also having lots of industries.

The people of Ondo are largely recognised for being the highest producers of cocoa.

They are known for their rich cultural heritage especially as shown in their musical demonstration and their popular cultural festival of Osun-Osogbo.

Prominent landmarks in Oyo State is Cocoa House, the first skyscraper built in Africa. NTA Ibadan, the first television station in Africa and Liberty Stadium, Ibadan the first stadium built in Africa are popular places that have contributed to the wide popularity of the Ibadan people couple with their traditional intonation.

They are popularly known for peace and tourism, couple with their serene weather.

Rivers State – Treasure Base of the Nation

Rivers is popular for being the largest Oil producing state in Nigeria.

Sokoto State – Seat of the Caliphate

The Sultan of Sokoto is a direct descendant of Usman Dan Fodio and is the spiritual head of all Muslims in Nigeria, this made Sokoto to be a notable place to be.

The people of Taraba are notable for their warm hospitality and agricultural produce.

Yobe State – Pride of the Sahel

They pride with their agricultural produces and fishing prowess.

Zamfara State – Farming is our Pride

The state is basically an agricultural state with over 80 percent of the people engaged in various forms of agriculture.